The Smart Dog U Blog

Fun, effective dog and puppy training information to help you have the best dog in the neighborhood! 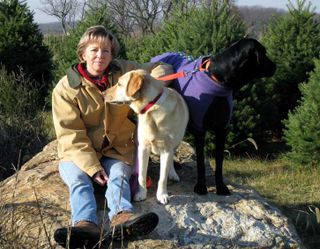 It was a beautiful day for choosing a Christmas tree. Our tradition is to take the dogs out to the local Christmas tree farm. Together we walk across the fields, looking at 8 - 10 trees before deciding on one.

We love Gaver's Tree Farm because (1) the view is stunning, (2) they have great trees, and (3) they have a little area where you can pet their farm animals.

Tango and Nemo went nose to nose with some very curious goats! I don't know who was the more cautious - the dogs or the goats!

We found a great tree, and the dogs had a romp through the fields. I love living "in the country" where you get views like this: 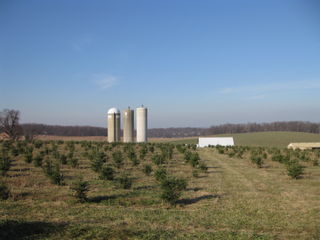 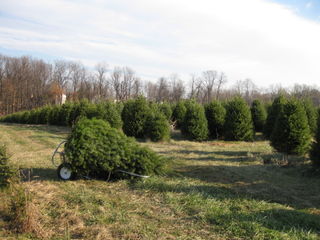 How Dogs Get In Trouble

If I had a dollar for every time I heard this, I'd be a millionaire: "The behavior came out of nowhere. One minute the dog was fine, the next minute he was jumping/biting/barking (insert inappropriate behavior here)." Truth is, the dog was showing so many warning signs, but the people either weren't watching the dog and thus didn't see the signs, or simply didn't know what signs to look for.

My parent's recently adopted Rottie, Copper, has been in the family since late summer. She's shown a little bit of fear around strangers, and has growled on occasion if someone has approached her too quickly or tried to give her a hug. So today, with a house full of strangers (to Copper), I was on red-alert for any warning signs.

She was doing terrific -- wagging her tail, approaching all the relatives that came in, just really enjoying herself. We'd never seen her around kids, though, so when my little 3-year old cousin came bouncing in, I intensified my observation of Copper. I also increased my management of her, as well. When Copper wanted to visit the little girl, I made sure I sat between Copper and my little cousin. I didn't watch my cousin, but rather I kept my eyes glued to Copper.

Where were her ears? Was she leaning forward or away from my cousin? What did Copper do when the little girl moved quickly? Or squealed? Or reached for her? By paying this much attention to Copper, it was very easy to spot little tiny warning signs.

Time for the leash -- I didn't want to give Copper the chance to get in trouble. I didn't see dangerous behavior in Copper, but I did see a lack of self control that could wind up getting her in trouble. I didn't want Copper to get a label she didn't deserve -- aggressive, unpredictable, or mean. Because she's not those things, but if left unattended, that's definitely what people would say about her because she would have surely knocked the little girl down.

A few of my aunts and uncles asked why Copper was on a leash. When I explained, they pooh-poohed my observations and said to just let the dog get used to the little girl. That's what gets dogs in trouble -- the "let them work it out" attitude that some people have.

Other people at the house couldn't see Copper's questionable behaviors even when I narrated and pointed those behaviors out. If not managed, Copper would have gotten too exuberant, knocked the little girl down, and would have gotten in trouble. When it really wasn't  Copper's fault - she doesn't know how to behave around children, so how could we hold her responsible for her behavior. If anyone should be to blame, it would be the people -- for letting Copper run amok.

So. For some of my family members, I overreacted. For other family members, I was seeing things that just weren't there. But the little girl stayed on her feet, Copper didn't get to practice inappropriate behaviors, and she's still labeled a "nice girl." So I don't mind the criticism from my family - I'd rather be criticized than the dog.

The Frederick News Post covered the Karen Pryor Academy's flagship Dog Trainer Program that I'm offering in Columbia, MD. The course begins January 24, and registration will close in early/mid December, so if you're considering enrolling, you're quickly running up against the application deadline.

So if you're thinking about applying, go ahead and do it! 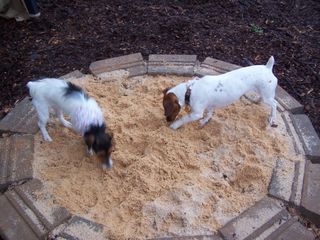 These two Jack Russell terriers are doing what they do best -- digging. While the dogs love it, the owners weren't so thrilled at having hole after hole dug in their yard.

They called me, asking how to stop the digging. I explained that stopping the digging would involve constant supervision while in the backyard, as well as keeping the dogs busy doing something else.

Plus, these are Jack Russell's - they LOVE to dig!

Instead of asking the impossible, and denying the dogs one of their biggest thrills, I suggested we give them an appropriate place to dig. Just one hole, well marked, where the dogs were allowed to dig.

After some initial giggles (a digging hole for the dogs?!), they started thinking about how nice it would be to have just one hole.

Much to my delight, they emailed me some pictures of the girls in their new sandbox -- it's the nicest one I've ever seen! The girls look happy, don't they?

Now we've got two happy dogs and a happy family. And one very happy trainer.

Rescued Vick Dogs W(h)ine for A Good Cause

Remember the Vick dogs? The pit bulls used for fighting by the former NFL star? Here's some good news about how they're doing now. See the article on MSNBC about the rescued Pit Bulls.

Surviving the Holidays With Your Slightly Out-of-Control Dog 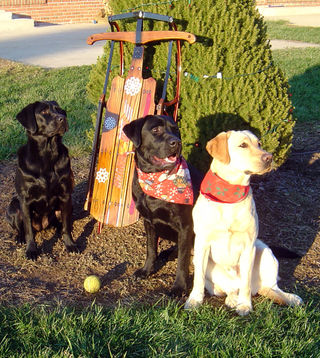 Worried that Fido will spoil Thanksgiving by eating off the table? Stealing the pies? Jumping on Grandma?

Wondering if your dog will find the Christmas tree a handy indoor toilet? Or will attack the ornaments on the tree? Will join in with barks when the carolers come 'round?

I gave a talk today for Your Dog's Friend in Maryland. They are dedicated to helping dogs stay in their homes by providing helpful advice to frustrated and confused dog owners. Here's a thumbnail sketch of what I covered today.

Start by planning. If you're worried about your dog jumping on guests, dashing out the door, or barking his fool head off, make a plan for how to handle the comings and goings. Assign a person to be responsible for the dog. Give that person a plan: tell him (or her) what to do with the dog when the doorbell rings or the door opens (have the dog on a leash, fill his pockets with really tasty treats, feed those treats rapid-fire to the dog as the guests are coming in).

This person, who we'll call the Dog Watcher, is solely responsible for the dog. At all times. Dog will be on the leash at all times and Dog Watcher should always have the leash in his hand.

Or if you don't have a Dog Watcher, use baby gates and crates to contain your dog. Stuff several Kongs with super delicious good food, then freeze them. Use those frozen Kongs to keep your dog busy while your guests are coming in and as dinner is getting served.

One last thing -- your dog doesn't have to be perfect! No one's dog is, believe me. If it's going to be easier for you, and better for your dog, if you keep him pleasantly occupied (with those frozen Kongs) in a back bedroom, then do it. Think about your dog and what's best for him - and then make your plan. Check out an article on this very topic on my Newsletter page.

Patricia McConnell, Ph.D. is an amazing scientist. She's a researcher, a rancher, a trainer, a speaker, and an amazing writer. You'll love her books The Other End of the Leash: Why We Do What We Do Around Dogs

and For the Love of a Dog: Understanding Emotion in You and Your Best Friend

. They're easy reads and will give an insight into what's going on inside your dog's mind. Fantastic books, I can't say enough good things about them.

She's also got a terrific blog  -- you should check out The Other End of the Leash. It's fantastic!

Suggestions for the Obama's and Their First Dog

President-Elect Obama and his family have the chance to do some real good for the dog-owning community. Here are my suggestions for the Obama’s:

Imagine how influential the adoption of an all-American dog from a shelter could be – not only would one dog’s life be saved, but the publicity would help thousands of other dogs waiting for a new family. And to see the First Family take responsibility and train their dog. What an opportunity to educate the nation on responsible dog ownership!

Call me, Michelle, I’ll be happy to help you and your family find a good dog, and help you teach him (or her) how to be a spectacular First Dog! 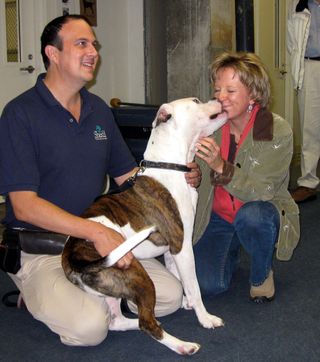 The newest Smart Dog University newsletter has been published. The feature article, Balanced Training: What Is It?, takes a look at the new buzzword balanced training.

If you're wondering what exactly balanced training is, how to use it, and if you should be using, this is the article for you.

Not a subscriber to Your Smart Dog? It's free and it's filled with all the info dog lovers need!

What If My Dog Bites Santa?

The holidays are right around the corner - worried about your dog's behavior during these particularly hectic times? What if he rips up the presents? Jumps on the guests? Ruins Thanksgiving dinner (or dessert!)?

With decorations, presents, goodies, and guests part of your holiday, you may have a recipe for stress this holiday season. I'll show you how to get through the holidays in a way that will make being a dog owner at least one less thing to worry about.

The seminar is free, but requires registration. Please register with your name, number attending, phone number, and name of workshop.

Although we love dogs, please leave yours at home. The seminar will be held at:
Potomac Community Center (PCC)
11315 Falls Road in Potomac, MD 20854.

Get updates on my activity. Follow me on my Profile.